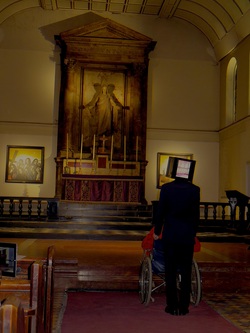 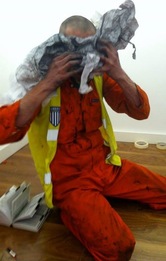 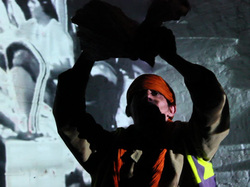 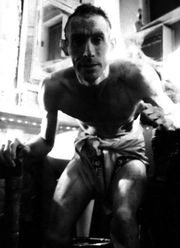 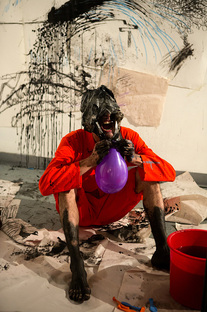 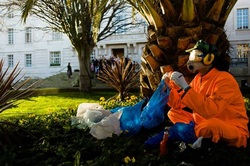 Photography (c) Marco Berardi
"Guilty"
Site/space
Ongoing Perfomance Art work referring to the current situation in Fukushima nuclear powerplant (feb 2014) as a symbol of the inconsiderate objectification of the living human body, only a tool to be protected for its monetary value on a market. Through engaging in meditative activities, the body becomes inanimate, unpredictable and freed from being utilised.
London Feb 2014. 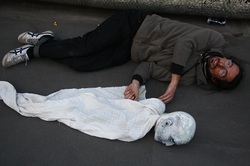 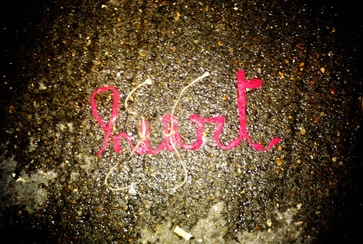 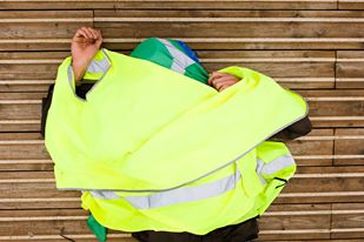 Photography (c) Marco Berardi
"From A to B"
Site/space #1 Olympic Park
A durational performance - walk from a pole to another pole facing each other wearing a hi-viz jacket and carrying lunch in a plastic bag. As the walk goes on the performer starts wearing more and more layers of jackets and protective gear. Until the accumulated items start taking over his body and modify his appearance and breath.
“From A to B” speaks of the cover-up of the self of beings of male gender in our society admittedly auto-inflicted but always generated by the majority of past and current governements and the capitalist economical development.
It speaks of the dehumanising of the person through alienating work tasks, anti-social work-shifts, accumulation of contradictory regulations and the ultra-policing of behaviours and mentalities through signage and conformism.
It speaks of corporations using corrupted government officials taking over and stealing our sense of responsibility and self-judgement in the controlling aim to destroy the individual's self-esteem thus supporting and officialising patriarchal values - which promote violence and domination and which does not tolerate the display of vulnerability, the sharing of emotions, the feeling and desire of connection with the self and with others - to the conscious detriment of a healthy society and against its survival as the resulting mental and intellectual imprisonment impeaches the growth of the individual and of relationships of a truly mutual nature between genders. 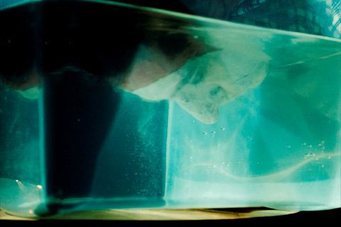 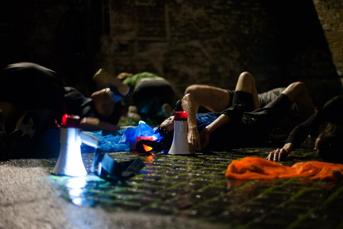 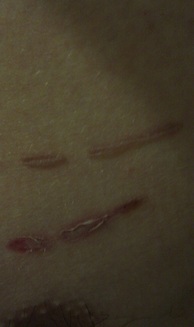 The piece's theme was invisibility and vulnerability. There is no recording of it but as a memory and the photo of the scare on my chest (opposite). This text is the only substantial record of the piece:
"I chose to start the piece when the audience was unaware, drinking and chatting between two performances. I swiftly covered my body with a black dark cotton blanket, collapsed under it then proceeded to move backwards across the black and white checked tiles of the room floor while undressing and leaving my clothes on my way, Some people took notice of my presence and actions, others did not. Bumping into the last couple of unaware persons silent was made as I struggled to crawl backwards on my derriere towards the opposite corner of the room. Naked under the black blanket. Once there I stopped and pushed myself against the wall, my breathing intensified gradually as if fear was taking me. the lights went off. I discreetly reached for matches and an incense stick and a mask that I had hidden in the area.This mask I made for a movie scene about an executor and was made to protect the executor from being affected by the emotions of his victim. It is a simple "monkey-face" mask covering the facial features and somehow darkly deforming it. I put the mask on my face under the blanket. I lit up one match and set fire to an incense stick. The light was revealing shapes of my body as I slowly got up sliding against the wall and letting the blanket slipped down, uncovering my mask, my arm with the inflamed incense stick , my shoulders, my trunk, my pelvis, my genitals and my legs. I stood in darkness, naked with the executioner's mask facing the scattered audience - with all of their own thoughts, emotions and body signals - and this space with its past and history and their unrevealed marks, smells and vibrations. I stood. And I killed the flame on the incense stick by holding it onto my chest to release its smell and power. The power its smoke has to reconcilliate with and dissipate the invisible emotions of this space, protecting me as I walked barefoot on the path made of my own clothes when I hastily and blindly undressed. Following the stick I was holding, listening to this old used space, hearing his stories and letting the smoke cleanse my thoughts and appease my senses. Vulnerable I, looking for a place to rest". 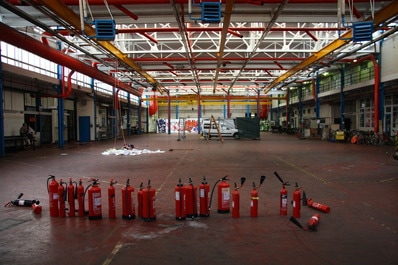